The Eiger vs Blind Man

The journey started way back in January of this year. There was lots of training which inclued exercise bikes, cross trainers and even me doing some running for the first time in 30years. All this time I am also still doing all my usual training for my climbing competitions. We then started to contact suppliers who may be able to help us with equipment. The ones who supported us can be found at www.eigerparaclimb2015.blogspot.co.uk
The day came when we finally left the uk and headed for the Swiss Alps. I was sure all the training would pay off, but I had to wait and see.
We arrived on the 18th July. Team sprits were high.  We arrived at the campsite later that afternoon the weather was great. 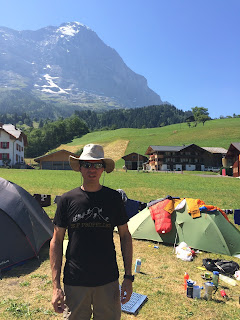 We set up camp and started weather watching.
We decided to do a rece to get used to the altitude.  All went well with nobody having any problems. The weather was also great on this day. We returned to camp.
All we needed now was a three day window in which to do the climb, we waited and waited.
Day 1
The window finally came on Sat 25th July. So off we set.
We arrived at Eiger station at 8.50am. This time we pushed on much quicker. We reached the previous high point and pushed on to the first bivi site which we reached at 13.40. The decision was reached that we should go higher.  So after a short rest we moved on. We found another bivi at around 3,450mertres. This was home for the night. We had dinner, then bedded down for the night.
Day 2
We woke, had breakfast, then started up again. The weather was good again, but because it was the west flank it took longer for the sun to warm us up, but eventually the sun appeared, warmed us up and melted any remaining ice. It was to turn into a very long day.
As we got nearer to the summit the winds picked up and the clouds came in, but visability was still good. We finally reached the final ice field, although i forgot to check the time, crampons were put on and me, Mark & Jay were roped together, and off we set. It was at this point I realised that I had a blister on my right foot, which meant I would feel every kick more than normal. Off we went. The 3 of us moved well together.
The summit was getting closer all the time, and I finally summited at 14.53.  I know this was the time as I have since checked on the selfie I took. 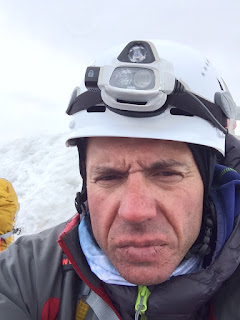 I was over the moon. Shortly after Colin & Alex joined us. But this was only half of the journey the hardest part was still to come, which was getting down.
We started the descent. At first it was by abseil just to get off the top icefields. Down we went all the time the wind was still blowing. It then started to snow. We then did quite a lot of abseils to descend quicker.  After some time the snow turned to rain and it started to get dark for me. Again I lost track of time and during one abseil it went dark for me, this was not a big problem it meant I went even slower. After another abseil it was decided to have an emergency bivi for the night. This was rock protected but was on a slope, so we all slept with our harness's on and were secured with slings and screwgates.

Day 3
After what was one of the most uncomfortable nights I have ever had it was time to get up. We woke to frozen backpacks. Thanks to Rab, for the bivi and sleeping bags, I was dry and warm. All set for our day ahead. More abseils were to follow. We arrived at the second snow field at about 14.45, at this point we knew the worst was over as we had been at this point before on our rece, the end was now in sight.  After some more scree slopes, some slabs and the final hand over hand sections the end was in sight. Me and Mark were slowly making our way to the train station when we noticed a train coming so we had to make a dash to catch it. Luckily we did. So after a long 3 days on the Eiger the Eigerparaclimb2015 had been a success with all 5 members summiting along with @finalcruxfilms who filmed our journey. This was the first time it has been summited by a blind man, a first for a sight guided ascent(Mark McGowan).
I want to thank all involved with this project, but a big thanks to Mark whom without his help this would not have happened for me.