Well it's that time of year again when we all look back at what we achieved.
I can honestly say that if you told me what I would do, I would have not have believed you.
It all started in January, Jake from climbout.co.uk announced his climbout #365 challenges.  Just for fun, you would set yourself as many challenges as you liked and try and do them in 2015. One of mine was to climb a mountain.  It was at this point my sight guide, & now good friend, Mark McGowan said 'do you want to climb the Eiger?'  Well what could I say but YES. Now this was my chance to prove that people with disabilities are just as capable of having adventure, with the right support.

So the training began. In an earlier post I did a very detailed write up of our first training day on Tryfan, where we climbed North Ridge.  We planned the climb for July 2015, so we had a good 6 months to plan & train.
While all this was going on I was still training and competing in International competitions. First up was Imst. then Chamonix which was just one week before we set of to Switzerland.
We travelled to Switzerland on 18th July. We did our recce on the 20th . After this the rest of the time was spent waiting for the right weather. We were looking for a 3/4 day window. The best we got came on sat 25th. The climb took the planned 3 days, 2 nights.
After the Eiger came the last IFSC comp held in Sheffield, also the National Paraclimbing Series had started with the first being in Scotland, where I came first.
Here's a short clip of boulder problem 3.

The last competition of the series was in Manchester at the beginning of December in which the series winners would be announced . I am very pleased to say that I am now British male V.I champion and have been reselected for the 2016 GB Paraclimbing team. 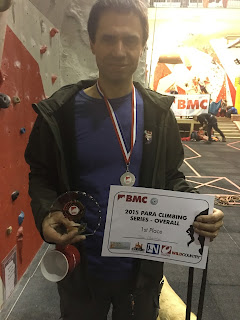 This coming year has international competitions, including the world championships and our new project which we are calling Voyage to the tallest wall in Europe. A kayaking adventure in Norway. Plans are still at an early stage with me and Mark needing to learn new skills. If you would like to help please get in touch. www.johnchurcher.co.uk
at December 28, 2015