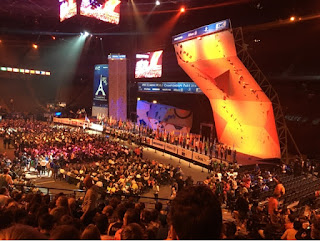 Preparation for this World  Championship had gone well,  at the last one I had picked up an injury 12 weeks before the championships, which you can imagine was not good news.  This time I was feeling much stronger. this time round the format was slightly different with the two qualifiers being held on two separate days and the Final being on the third day (depending on which category you were in, there was one Final on Saturday and another on Sunday). This time I had decided before I got to the competition that I was going to enjoy it, and not let nerves get the better of me and all in all this plan worked.
Before I got to the competition I knew that I would not have my usual sight guide and therefore would have to rely on the new team manager, who I had not climbed with before, and he had not sight guided me before in a competition.  I guess this makes me more apprehensive than actually being in front of a large crowd. Things were going okay.  I got kitted up and started warm-up.  I then proceeded to put on the radio mic that I use for communication with whoever is calling for me. This is when I first started to notice that I was having a lot of interference with it I thought nothing of it as this has happened before, and thought it would be okay. When we are out in the arena because the caller would be in a direct line of sight there would be nothing in the way to interfere with the signal? How wrong could I have been. Prior to this we had been over the moves quite a few times so that I could try and remember particular points that would be important later on. Then disaster struck from my point of view, no sooner had I gone no more than 2 m off the ground and the radio mic cut out.  I have a little bit of sight so if I am looking directly at the hold and it is no more than say a meter away I may be able to locate it. I decided that the best course of action was not thinking about messing with the radio but to just climb! I should also point out that the holds were not the best colour for providing colour contrast, as they were yellow on a pale background, not ideal for visually impaired climbers. Who knows what they were thinking when they set the route.  At certain points Robin (sight guide) was telling me to go one way and I went the opposite. I guess it must've looked quite comical from the ground with Robin shouting as loud as he could and me shouting down to him 'I can't hear you'.  Considering all of that, the route went quite well. I did not get to the top, but at the end of the day there were five of us within three points of each other.
Day two was the second qualifier. I had the same issues with the radio, so this time we tried using mobile phones which worked better.  The only thing that didn't go better was  my climbing. I'm not really sure what happened, but I didn't get up as far on this route. But I had made it through to the Final, which was to take place on the following day.
Finals day came and I was feeling pretty good about it. We also used the mobile phone technique for communication. I was much more pleased with how I climbed on this route, and just had to see how well the other competitors did. In the end there was no podium place for me, as I came fourth.
I always get such a buzz out of representing my country. With the competition out of the way I could now enjoy the rest of the World Championships.